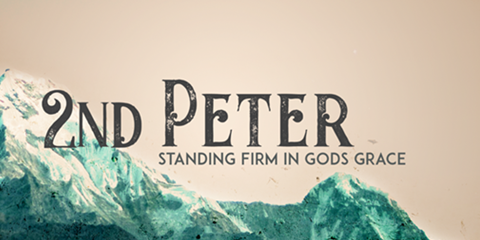 Watching Out for Wolves
2 Peter 2

Watching Out for Wolves

2 Peter 2:1-3 But there were also false prophets among the people, just as there will be false teachers among you. They will secretly introduce destructive heresies, even denying the sovereign Lord who bought them—bringing swift destruction on themselves. 2 Many will follow their depraved conduct and will bring the way of truth into disrepute. 3 In their greed these teachers will exploit you with fabricated stories. Their condemnation has long been hanging over them, and their destruction has not been sleeping.

2 Peter 1:19-21 We also have the prophetic message as something completely reliable, and you will do well to pay attention to it, as to a light shining in a dark place, until the day dawns and the morning star rises in your hearts. 20 Above all, you must understand that no prophecy of Scripture came about by the prophet’s own interpretation of things. 21 For prophecy never had its origin in the human will, but prophets, though human, spoke from God as they were carried along by the Holy Spirit.

·         FTs Do teach messages about your feelings – you based teachings

2 Timothy 4:3 For the time will come when people will not put up with sound doctrine. Instead, to suit their own desires, they will gather around them a great number of teachers to say what their itching ears want to hear.

2 Peter 2:4-6 For if God did not spare angels when they sinned, but sent them to hell, putting them in chains of darkness to be held for judgment; 5 if he did not spare the ancient world when he brought the flood on its ungodly people, but protected Noah, a preacher of righteousness, and seven others; 6 if he condemned the cities of Sodom and Gomorrah by burning them to ashes, and made them an example of what is going to happen to the ungodly;

2 Peter 2:7-11 and if he rescued Lot, a righteous man, who was distressed by the depraved conduct of the lawless 8 (for that righteous man, living among them day after day, was tormented in his righteous soul by the lawless deeds he saw and heard)— 9 if this is so, then the Lord knows how to rescue the godly from trials and to hold the unrighteous for punishment on the day of judgment. 10 This is especially true of those who follow the corrupt desire of the flesh and despise authority. Bold and arrogant, they are not afraid to heap abuse on celestial beings; 11 yet even angels, although they are stronger and more powerful, do not heap abuse on such beings when bringing judgment on them from the Lord.

2 Timothy 4:18 The Lord will rescue me from every evil attack and will bring me safely to his heavenly kingdom. To him be glory for ever and ever. Amen.

James 4:6 But he gives us more grace. That is why Scripture says: "God opposes the proud but shows favor to the humble."

·         God always brings judgment to those who oppose Him, and He rescues those who are of Him.

2 Peter 2:12-19 But these people blaspheme in matters they do not understand. They are like unreasoning animals, creatures of instinct, born only to be caught and destroyed, and like animals they too will perish. 13 They will be paid back with harm for the harm they have done. Their idea of pleasure is to carouse in broad daylight. They are blots and blemishes, reveling in their pleasures while they feast with you. 14 With eyes full of adultery, they never stop sinning; they seduce the unstable; they are experts in greed—an accursed brood! 15 They have left the straight way and wandered off to follow the way of Balaam son of Bezer, who loved the wages of wickedness. 16 But he was rebuked for his wrongdoing by a donkey—an animal without speech—who spoke with a human voice and restrained the prophet’s madness. 17 These people are springs without water and mists driven by a storm. Blackest darkness is reserved for them. 18 For they mouth empty, boastful words and, by appealing to the lustful desires of the flesh, they entice people who are just escaping from those who live in error. 19 They promise them freedom, while they themselves are slaves of depravity—for “people are slaves to whatever has mastered them.”

·         False Teachers are full of charisma but void of Character.

2 Peter 2:20-22 If they have escaped the corruption of the world by knowing our Lord and Savior Jesus Christ and are again entangled in it and are overcome, they are worse off at the end than they were at the beginning. 21 It would have been better for them not to have known the way of righteousness, than to have known it and then to turn their backs on the sacred command that was passed on to them. 22 Of them the proverbs are true: “A dog returns to its vomit,” and, “A sow that is washed returns to her wallowing in the mud.”

Acts 20:28-31 Keep watch over yourselves and all the flock of which the Holy Spirit has made you overseers. Be shepherds of the church of God, which he bought with his own blood. 29 I know that after I leave, savage wolves will come in among you and will not spare the flock. 30 Even from your own number men will arise and distort the truth in order to draw away disciples after them. 31 So be on your guard! Remember that for three years I never stopped warning each of you night and day with tears.

John 8:12 “I am the Light of the world; the one who follows Me will not walk in the darkness, but will have the Light of life.”